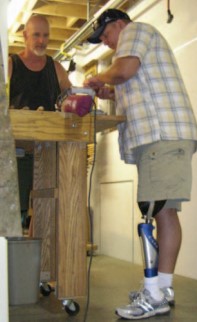 Matt served as a military police officer in Iraq. One morning, after days of heavy mortar and grenade attacks, his platoon sergeant decided to move Matt’s unit.

During the move, Matt was asked to transport some equipment into the communications tent. When he got into his Hummer, he noticed a 50. caliber rifle in the back seat. Matt didn’t think the weapon was loaded, so he grabbed it, but when he shut the vehicle door, the rifle discharged.

The bullet entered his left leg, severing 70% of the muscle and bone from the knee down. After 20 surgeries and 15 months of trying to save the leg, Matt developed a staff infection and doctors decided it was best to amputate the leg.

As part of his Dreams Come True wish, Sun Valley Adaptive Sports flew Matt and his wife to Sun Valley to learn the art of woodcarving and fly-fishing.

After a concentrated week of one-on-one instruction, Matt said, “I now believe, I can accomplish anything!” Matt went home not only having learned skills and techniques for fly-fishing and woodcarving, but Matt went ho