I remember lying in a hospital bed. It was my daughters first birthday, but I had not seen her since she was three months old. I had left nine months earlier with Charlie Company, 2nd Military Police Battalion, 2nd Marine Division as a machine gunner for a tour in Iraq. But three weeks before our scheduled departure to come home I was involved in an incident which resulted in a five day drug induced coma. Now I lay in a hospital bed in Bethesda, Md., just outside of D.C., where I had been for almost two months.

My once muscular 175lb body was reduced to an appalling 135lbs. I had so many tubes and lines coming out of my body that I had to have two poles, one on either side of my bed, to hold all the fluids, medications and drainage bags that were keeping me alive. I had uncontrollable diarrhea and the doctors were talking about another surgery to try and get my digestive system to work properly. I had already spent my second wedding anniversary in the hospital, the rest of my unit was already home with their families, and now I was missing my daughter’s birthday.

I tried to have a positive outlook but I was getting extremely depressed. I remember lying there hopeless with no positive end in sight. I had not been able to eat or drink for two months and the doctors still did not know why. I remember wondering if I would ever get home to see my daughter again, and if I did, would I be able to take her to the park and play with her, push her on the swings, and wrestle with her in the grass? It all seemed so far away.

A freezing blast of wind pulls me back to the here and now. I stand on the summit of Mt. Baldy in Sun Valley, Idaho, looking out over the valley at the awesome view. It is a clear blue sky and with one slow turn of the head I can see the Sawtooth, the Boulder, and the Pioneer Mountain ranges. Over my right shoulder, I can see all the way to Utah. It is magnificent and breathtaking. I have my snowboard strapped to my feet and every inch of my body is covered in warm clothing. Fresh powder from the snow guns billows out into the subzero air on the slope below me, a black diamond run named Limelight.

I look down to see Tom carving tracks in the fresh “gun powder” on his skis. Shifting my weight to my rear foot, the nose of my board raises off the ground. I roll back on the tail of my board and then popping it up, I alli over the lip of the slope and start speeding down the run. The snow is amazing and my board reacts instantly as I apply pressure, slicing into a turn I go first left, then right, as I begin to carve my way down the mountain.

Wow! How did I get here? How did I go from that hospital bed just 18 months before to speeding down this diamond run at breakneck speeds with total confidence?

I had snowboarded a bit before Iraq, but I remember the first time I got back on a board about 3 months after I got out of the hospital; it was a total disaster. I felt like I was starting all over and it was not fun. It was about that time that I started getting phone calls from this guy, Tom Iselin. He left me a few messages, saying that he got my name and number from my 1st Sgt., and wanted to talk to me.

I assumed that it was just another guy doing a survey of how good my medical care was and how well they had treated me. I was getting tired of these phone calls. I had received excellent medical treatment and the doctors and nurses were all fantastic, but these surveys were getting redundant.

Naturally, I never called him back. Fortunately, he kept calling and about two weeks later I answered the phone to “Hi, this is Tom Iselin, executive director of Sun Valley Adaptive Sports. How are you doing today?” Oh great I thought, now I have to waste an hour on the phone with this guy.

But the next thing he said made my jaw hit the floor. “I would like to get you and your wife up here to Sun Valley for three or four days to ski, snowboard, snowmobile, paraglide you name it, my treat.” Is this guy legit? I thought, he doesn’t want my credit card number? I don’t have to sit through a two hour spiel about a time share? As we talked over the next few weeks, I remember getting really excited.

Then in March 2006, six months after I was released from the hospital, myself, my wife and three other injured Marines with their guests headed for Sun Valley for our first annual snow sports reunion. Sun Valley Adaptive Sports (S.V.A.S.) had everything set for us. Our accommodations were great. We had rooms at the Sun Valley Resort and had one on one ski/snowboard lessons lined up for us, as well as snowmobiling, paragliding, Nordic skiing and sled hockey. And if all of this wore you out, you could go relax and get a massage from Zenergy spa.

In the evenings we had amazing dinners where we got to meet some of the sponsors of “Higher Ground”, the program that S.V.A.S. had created for injured veterans. Over that first trip with three days of snowboarding with my own instructor, I was able to not only get back into snowboarding, but easily surpassed my previous skill level of boarding. I was reintroduced to the joys of the mountain and found that instead of my constant pain keeping me from boarding, as many had suggested, the total experience of snowboarding and just being on the mountain chased away and helped me forget my pain. 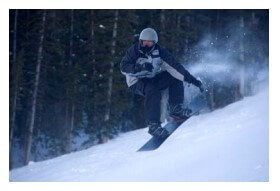 Now, nine months and at least twenty five more days of boarding (I went and bought a season pass at bogus, just a 40 minute drive from my house) after that first trip, I am back in Sun Valley. Right now it is only Tom and myself carving down this amazing slope. We are coming up on a cat track and I watch as Tom makes a slight speed check and launches off the cat track into a beautiful 360 Degree helicopter and lands it perfectly.

I follow him down, speed check once, then again, line up my take off, and launch off the lip of the track. Once in the air, I compress over my board, and with my rear hand I grab the toe edge of my board between my feet. It feels totally stable as I float down, release the Indy grab, and stomp the landing. An overwhelming feeling of exhilaration surges through me and involuntarily I let out a yell at the top of my lungs. Whooo!! Yea!! My fist is pumping into the air. Tom has pulled to a stop and as I skid up to him we high five, then continue to fly down the mountain.

This is my last day in Sun Valley for this trip. Everyone else left last night or early this morning, but I wanted to hit the mountain one last time before driving home. I met Tom at the lodge for breakfast at 0800, and then hit the mountain with my instructor until 1000 when Tom met up with me on the mountain. We will ski/board till noon, catch some lunch and then I’ll head home. 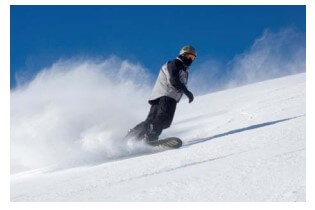 This trip started five days ago for seven injured vets and a few guests. This year S.V.A.S. planned the trip in conjunction with the kickoff of the first annual Honda Ski Tour. It has been amazing from day one, with more snowboard lessons and all access passes to the concerts and ski events. It has been five amazing days of great food, fun, and even better company.

Throughout this whole experience I have been inspired to dream again, and through the “Higher Ground” program, I have opportunities to realize these dreams. Not only have doors been opened to me to accomplish goals and dreams that I thought were lost forever, but now I feel as though I can aspire to reach for “Higher Ground”, that I can truly do things I always thought would be cool but never actually believed would ever happen.

Thanks to everyone at S.V.A.S. I have gotten back into snowboarding and far surpassed my best expectations of skill in riding, which in turn has allowed me to set new, higher, more demanding goals that I truly believe I will accomplish. This boost in confidence has helped me to begin hiking, hunting, and mountain biking again; all activities I had thought were lost after my injury.

As if that were not enough, S.V.A.S. has opened doors for me to begin rock climbing and kayaking, two sports that I have always been interested in but never thought I could get into even before my injuries, let alone after. 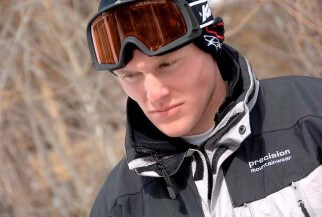 So what do I see in my future? Well I certainly don’t see my injuries or anything else holding me back. I look forward to future outings with the people that myself and the other injured vets have come to know as our “Sun Valley Family”, as well as to meeting and making new friends through these “reunions.”

I see myself competing in snowboarding and one day, heli-riding and instructing for S.V.A.S. I want to rock climb, mountain bike, and kayak throughout the U.S. When I was sixteen I remember climbing Mt. Borah and having this crazy notion of climbing the highest peak in each of the western states, including Alaska. Now it doesn’t seem so crazy.

Besides all of this, I find myself wanting to be a better husband to my wife and a better father to my daughter, to somehow find a way to share my new found outlook on life with them. I can’t help but feel that my faith in God and my faith in the goodness of mankind have been strengthened.

We are coming to the bottom of the run now 3200 feet of amazing vertical drop in one consistent run, wow! As Tom and I get on the lift to go back up, we high five again and comment on how awesome the snow and the mountain are. We only have time for one more run before getting lunch and then it is hugs and heartfelt goodbyes until we meet up again.

As I load up for the drive home, I hope that some day I can be as instrumental in inspiring others as Tom and everyone at Sun Valley Adaptive Sports as been to me - that one day I might help others to reach for “Higher Ground”.